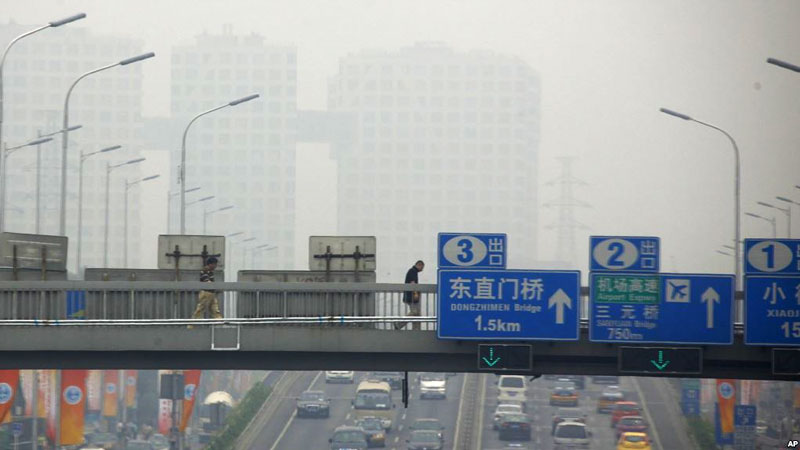 A pedestrian walks across a bridge above a main road on a day with high air pollution in Beijing, June 6, 2012.

Chinese authorities Tuesday denied rumors of a poisonous industrial leak in the city of Wuhan, in central Hubei province, after a thick yellow fog engulfed the city and its surrounding area starting early Monday morning.

The province's environmental protection department said on its web site that the smog was the result of straw burning, but advised people to stay indoors as much as possible and wear a protective mask outside.

"We exclude any industrial pollution causes behind this abnormal weather," the note said.

Speculation online had linked the unusually heavy smog with an industrial leakage, and users posted pictures of Wuhan engulfed in smog, next to photos of the same location on a clear day.

Local police posted an announcement online Tuesday saying that they had detained two Internet users who had spread rumors about the unusual haze.

According to the police, the users had claimed that the poor atmospheric situation was caused by a chlorine leak at a chemical factory, or by an explosion at a steel plant. Noting that such false information had "caused panic among the netizens," Wuhan police advised people to be wary of Internet rumors.

Later on Tuesday, the topic of "Wuhan haze" was trending high on Chinese microblog Weibo, with some people remaining skeptical of the official explanation.

"Industry explosion still seems like the true version of events," one Internet user from Wuhan wrote on his microblog. "Then I might delay my plans to come back to Wuhan," a friend responded.

Straw burning, which officials point to as the culprit of Wuhan's yellow haze, also affected the air quality of Beijing before the start of the 2008 Olympic Games, with city officials imposing temporary bans on wheat straw burning in neighboring provinces.

Air quality is a major issue in Chinese cities, where official measurements often show lower levels of pollution compared to outside sources.

The U.S. Embassy in Beijing has installed a pollution monitor on its roof, and for three years has been providing hourly updates on the quality of the capital's air. In most cases, such readings showed much more severe levels of pollution than the ones recorded by Beijing's Municipality Environmental Monitoring Center.

Last week, deputy environment minister Wu Xiaoqing told reporters that the U.S. initiative was illegal, and that only the Chinese government was allowed to measure and publish information on air pollution.

On Tuesday, Liu Weimin, spokesman for the Foreign Ministry, did not give details of the situation in Wuhan, but acknowledged that air quality is a grave challenge to China in the course of its development.

"China is making every effort to further improve the air quality," he said, but added that the country is still at the initial stage of the industrialization process.

"The issue of air quality is unlikely to be solved overnight," Liu said.

Some information for this report was provided by AP, AFP and Reuters.