Small plastic straws, a source of environmental pollution. It is normal for us to drink beverages, drink yogurt, and use plastic straws. However, these straws enter the garbage dump after being used. Due to their small size, they are difficult to be grabbed by the garbage disposer and then recycled. Therefore, the ultimate fate of most plastic straws is to fall into the landfill, which is difficult to degrade for many years, affecting the soil and the environment, and many of them will float on the ocean, causing serious harm to marine life.

McDonald's China announced that the company will further reduce plastic on food packaging and phase out plastic straws. Starting from June 30,2020, McDonald's China will be the first to implement this initiative in nearly 1,000 restaurants in Beijing, Shanghai, Guangzhou, and Shenzhen. Consumers can directly drink cold drinks without solids, such as cola, through the new lid. McDonald's China told the media that relevant plastic reduction measures will cover all McDonald's restaurants in mainland China within 2020. By then, it is expected to reduce the amount of plastic by about 400 tons per year. Subsequently, Zhang Jiayin, CEO of McDonald's China, also mentioned that using the scale of McDonald's to reduce the "small step" of straws can also become a "big step" for sustainable development.

Why McDonald's China Will Further Phase Out Plastic Straws

One for you and one for me, with an annual output of 30,000 tons of plastic straws. When going to McDonald’s for fast food, many people will ask for a drink, then sip it with a plastic straw.

According to a report from CCTV Finance, the cumulative output of plastic products nationwide in 2019 was 81.84 million tons, of which nearly 30,000 tons of plastic straws, or 46 billion, were used per capita over 30. Industry experts said that the use time of plastic straws is only a few minutes, but the degradation time may be as long as 500 years.

In a McDonald's restaurant in Beijing, the new beverage packaging has been launched. The new cup lid has an additional drinking port, which is similar to the previous packaging method of hot drinks. Open the small lid on it to drink directly. According to the observation of Chinanews.com, there is no longer a straw box for customers to take the plastic straw on the ordering counter, and many customers who have taken the meal will ask the staff: "Where is the straw?" 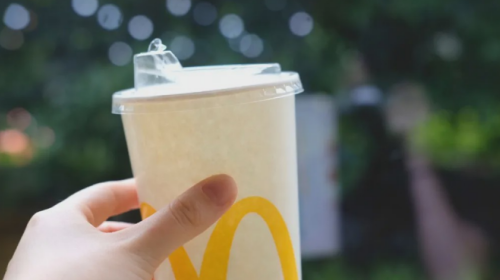 "Yes, this is the question that has been asked the most recently." McDonald's staff told Chinanews.com that not only the customers are not used to it, but their staff are also very uncomfortable: "I didn't know how many straws to fill the box every day. , I reduced this work at once, which was quite awkward for a while."

But for the removal of straws, McDonald's staff expressed their support: "The usage is really very large. When we have the most in the store, we can use nearly a thousand plastic straws a day."

According to statistics, there are currently more than 3,500 McDonald's restaurants in mainland China, and the average annual use of plastic straws is about 400 tons.

McDonald’s China does not have straws, which stems from a positive and kind response to the environmental protection concept. As the propaganda copy of McDonald’s China says-for the sake of the earth, I will not "control". Although from the perspective of environmental protection, China's functional departments have always advocated the use of less white plastic bags and less straws, but there is no rigid "plastic ban" regulation. Therefore, our shopping malls, supermarkets, restaurants, restaurants and other places still provide plastic bags or straws for the convenience of customers.

Like other disposable plastic products, straws are also white garbage that is difficult to degrade, which affects the soil and the environment. Furthermore, some straws with "three noes" are of poor quality and can release harmful substances, endangering the health of users. In addition, discarded straws are the bullies of the ocean, causing harm to marine life. Therefore, we should replace paper straws, reduce the use of plastic straws, and eventually eliminate them.

In January this year, the National Development and Reform Commission and the Ministry of Ecology and Environment issued the "Opinions on Further Strengthening the Treatment of Plastic Pollution", which put forward new requirements for disposable plastic tableware: By the end of 2020, the catering industry nationwide banned the use of non-degradable disposable plastic straws . It can be seen that McDonald’s China bans plastics in advance and does not provide straws for beverages. The driving force is not from the regulatory constraints of government departments, but a cautious feeling for environmental protection, which is admirable.

In fact, not only McDonald's, KFC has also made such a regulation. In 2019, some KFC stores in China cancelled plastic straws for beverages. In addition, Starbucks and Heytea have also taken actions to replace plastic straws in the Chinese market. Obviously, this kind of company is really a good start for the plastic limit and environmental protection, which is worthy of appreciation.

While plastic products facilitate people's lives, they also bring headaches. A British media said that plastic is the worst invention of mankind, because it is very difficult to dispose of plastic-because plastic has a stable physical and chemical structure, it may not be decomposed in the natural environment for tens to hundreds of years. Moreover, scientists have found the existence of microplastics in human milk and feces, indicating that plastics have entered the human food chain and its potential impact cannot be ignored.

Under the background that many businesses still use plastic products in their own way, McDonald's China takes the initiative to "reduce plastic", which is a kind of environmental protection consciousness and has a good head. I hope that more businesses will take the initiative to join the ranks of "plastic reduction" as soon as possible, and contribute to building a beautiful planet.

Biodegradable And Environmentally Friendly Materials Tableware And Packaging Can Be Used

Some customers revealed that no straw is not convenient for young children and some drinks with large particles.

The manager of the fast-food restaurant revealed that some parents pointed out that it is inconvenient to take young children to eat without a straw. The interviewed parent Mrs. Yang (32 years old, tuition teacher) pointed out that if children between the ages of 4 and 7 do not have a straw, they feel that small accidents will happen at any time.

Some netizens suggested that instead of not giving straws at all, fast food restaurants may provide more environmentally friendly alternatives.

All GREENWEIMO food packaging series use plant raw materials-sugarcane and wheat straw, which are naturally degradable and non-polluting. Welcome to inquire for more details.